On Walker’s Bend, where I come from, when a loved one died, we didn’t have a proper funeral home; we had Bro. Rannie. He was a mortician and part time taxidermist.    He didn’t advertise it, but, if you used him for your funeralizing needs, he would mount your next deer head free.

When he got the call, he’d  go by the Piggly Wiggly and pick up a 3” slab of Talladega Marble he kept back in the meat freezer, bugee cord it on top of his Rambler,  and head to your home.  It was a “cooling board” used to keep the dearly departed “fresh”.

All the families in our community believed in sitting up with the dead.  We didn’t do the quick    visitation in between going to Walmart and Shoneys.    No 30 minute funerals for us, they lasted all night and into the next day.   Family came in from all over, packed the front yard with cars and pickups, spilling out onto the gravel road.   A large floral wreath hung on the front door to mark the occasion.

In fact, when grandma and grandpa re-did their living room, they measured for a little alcove on one side of the fireplace that was just the length of coffin.  When not in use, a couch occupied the space.  I never cared much to sit there it seemed a little disrespectful.     You were sure to hear funeral phrases that may or may not be true; “I’m sorry for your loss”, or “I know they’ve gone to a better place”, but if you wanted to be absolutely truthful you couldn’t go wrong saying, “They’ve gone to their just reward”,  that covers both sides of the moral dilemma.   The one I heard when my aunt Earline died was just doubly wrong,   “God needed another angel in his choir”.  She was never an angel, 3 ex-husbands would attest to that!!   When she sang, if that was the criteria for dying, she would have lived forever!!!   Our funeralizing was up close and personal- it was expected someone would go into histrionics, and it was according to how close a kin as to how far you could go with the flailing, crying and fainting. If someone got too carried away, the old ladies would cluck their tongues and whisper to each other…”well they were only a second cousin”.

My job when we were sitting up all night was “flyswatter boy”….On a sultry southern summer night with no air conditioning and the windows wide open,  you are going to attract ….”Visitors” of the bright green variety.  A cheese cloth was kept pulled over the viewing area to the casket and my job was to “flyswat”.  This is an important job and there is an art to it. Don’t swat straight down; you’ll leave a greasy spot and that doesn’t look good up next to your loved ones face. Don’t swat to hard or you’ll spread bug parts all over the place.  At my Uncle Lester’s funeral I was doing my usual duties and my cousin Kenny was helping. We were alone in Grandma’s living room.  Everyone was either in the kitchen or had gone outback to “refresh” themselves.  Grandma didn’t allow any alcohol in her house.  I don’t know what possessed him, but Kenny walked up to Uncle Lester’s coffin, pulled back the cheese cloth and stuck his finger on his cheek, it sunk right in, we were horrified!!  Kenny tried to smooth it out but it just looked worse; now there was a bulge. It looked like Uncle Lester had a plug of chewing tobacco in his cheek.  Hearing someone come in the room we hurriedly pulled the cheese cloth back up.  Just as we finished, his widow, Aunt Leoma walked in.  Holding our breath, we knew we were done for; she would be a volcano.   Aunt Leoma walked up to the casket, straightened out the cheese cloth,  looked at her dearly departed and said-“That’s just perfect , “You know you never saw your Uncle Lester without his Red Hound-who thought to do that?”   I let out a sigh of relief and whispered a prayer, “Ain’t God Good!!”

As a young boy I spent a lot of time in the pan-handle of West Texas (1950s) - my father and brother were preachers and held revivals in numerous churches all across the region every summer.  It is a common practice to give an oil well a name and on the out skirts of one of those towns an oil well was named, “3 Inches”. A large oil company drilled 5000 feet and came up dry.  They capped the oil, took their loss and moved on.  During one of the “bust” periods of the West Texas Economy, the local churches were stretched to their limits trying to provide food for families being affected by it.  A pastor praying one afternoon felt a strong urge to drive out a certain road-he would pray and all that would come to him was to drive that road.  He gave in and drove to the edge of town and there with tumble weeds blowing around, was that abandoned oil well.  Looking out his car window- God spoke to him, “buy the rights to that well”.  For several days he wrestled with that seemingly irrational thought; finally he contacted the oil company and inquired, they told him he could have it for $1.00-wasn’t any use to them.  After purchasing the well he scraped together a few thousand dollars and got a “wild catter” to open the hole; after drilling just 3 more inches- a gusher came up out of that ground spewing black gold and the means to provide for needy families in the area. If you hang on just a little longer, keep believing  God’s promises are real,  and don’t give up on yourself or those you love-you never know when 3” is all you need!!!!.   www.BruceStoryteller.com    Copyright 2015. 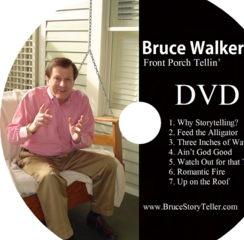 Author’s Note-I have a series of stories titled “Standing in the Check Out Line” this is one of them.

I walked into a very nice antique store and among the costly antiques and heirlooms was a statue of a hideous old woman; Long nose with a wart on the end, gaudy dress, big ears and crooked, yellow teeth showed through her grimacing smile.  She looked so out of place among the tasteful and very expensive items displayed.  With other pieces in the shop selling for thousands of dollars, this “work of art” had a “Not for Sale Tag” attached.   I asked why.   This is her story.

The smiling owner behind the counter said, “I was raised in very modest circumstances on the rough side of town.  Every Sunday my Aunt Myrtle would go to church with us.  I would be fresh from a bath and have on my best clothes but she would ask, “Shouldn’t you go change into your good clothes?”  Afterwards at dinner, she would say to my mother, “Did you forget to put the meat on the table?”  Mom had chopped it up in the gravy to feed everyone.  There was never a kind word for anyone she deemed less than worthy which included me.”

The proprietor told me, “I described my Aunt’s actions and personality to the artist I commissioned to make this statue.  From that description he created this art piece. . .  Every morning when I come through the front door Aunt Myrtle greets me, reminding me to be kind to children, don’t judge others in their circumstances and be grateful for my life. Everyone in town thought of her as this well to do woman who had everything in life she wanted.  One of the things Aunt Myrtle didn’t have was compassion.”   Be nice to those you encounter, you don’t know what form revenge may take!!

Traveling in a Gospel Band
By Bruce Walker    copyright 2016

Growing up in the 70’s the cool thing was to start a band.   If you were from the city you started a rock band, from the country; a country band and if you were from church you started a gospel quartet, that is how I came to be a part of a gospel group.   We had sung locally for several months before we got our first out of town invitation.  I answered the phone, and the pastor on the other end said, “I hear ya’ll are a fine group of young people and we would love to have you come sing at our 3rd Saturday night gospel singing”.  I told him we would be glad to come and he gave us directions…this should have been a clue, but I was clueless.  “Go down Crenshaw County Rd 183 turn left at the new plowed field,  past the double wide and turn at the chicken house, go through the pine thicket and you will see our church, “Jack Strait Holiness Church Fire Baptized in Jesus Name Number Two”.   We showed up on the appointed Saturday and set up our sound system and instruments.  The first song we sang, “Jesus is Coming Soon”, the whole congregation was on their feet with hands clapping and joyous voices joining in. We had never had such an enthusiastic crowd.  Along toward the end, a gaunt faced farmer in overalls, with a crisp white shirt and a black clip on tie, came on the platform and slid out a wire-meshed brown wood box from under an old pew.  He pulled out a 12 foot long rattler with a head as big as a football!  I’m not exaggerating: Everything looks bigger when you are staring death in the face!  The old farmer asked me if I handled the serpent, I told him, with a tremor in my voice, “I sure do, I just don’t happen to have my hoe “handle” with me right now”.  I had a Wendy Bagwell moment, (You Southern Gospel music fans will know what I’m talking about).    He screamed expletives at that snake; I guess it’s alright to cuss in church if you’re aiming it at the devil.  He shook it like a baby rattle, I actually felt sorry for that old serpent.  The service ended, we loaded up our equipment, and didn’t even wait for the love offering.  We were afraid that snake might be loose in the collection plate.  As we drove back home, Dave, our lead singer said, “I wonder what happened to church number one?”

We were invited to another out of town church a few weeks later, before I accepted the invitation I enquired if they had any wild life on the platform.  Toward the end of the service, the young lady pastor jumped up and in a loud, commanding voice said, “God told me to stand on my head and no one better look, if you do, God will strike you blind!”  She flipped up on her head and her long dress fell down all around her.  You think I looked?  No ma’am, I had my eyes closed, I’m a believer!   But I did hear her holler at someone at the back of the church,   “Horace, what do you think you’re doing?”  I turned to look and peeking between his fingers, Horace had one eye open!  He hollered back, “I’ll risk one eye!”